The site of Cancho Roano is located in the municipality of Zalamea de la Serena (Badajoz), on the left bank of the Cagancha, a permanent watercourse which, together with the numerous streams that cross the site, must have been a determining factor in its foundation. Excavated for more than 20 years, the work was directed by J. Maluquer de Motes (1978-1987) and S. Celestino Pérez (1986-2001), resulting in an extensive bibliography.  Next to the site is a visitors' centre, which was opened in 2001.

The site contains the remains of three superimposed buildings. The last building, or Cancho Roano A, in an excellent state of conservation, was built on the ruins of Cancho Roano B, which in turn was built on the remains of Cancho Roano C. Although each building has a different architectural concept and probably a different purpose, the most important thing is that they share the same space for worship, with two altars and their orientation towards the sunrise.

The original sanctuary is Cancho Roano C, which was considerably affected by the building of the two later sanctuaries. However, the main room where ceremonies were held remained intact. The most outstanding element is the circular altar which stands in the centre of the space, whose shape is reminiscent of symbols from the eastern world. Next to the altar there was a row of mud bricks for storing the offerings, and a vessel for storing the bronze pots required for the libations.

The religious and commercial importance that this site must have had led to the need for new spaces, so it was decided to demolish the original sanctuary to build Cancho Roano B on these ruins.  In spite of the constructive complexity of this new sanctuary, the space of the main room where people worshipped in the previous phase was maintained, so that a new altar was built in the same axis as the circular altar, although this time in the shape of an outstretched bull hide. The remains of this second building consist of the main façade, sections of its walls, part of the perimeter rooms, the eastern stone terrace and a section of the moat, which has made it possible to reconstruct a large part of its floor plan.

The building that can be visited today belongs to Cancho Roano A. It consists of eleven rooms and a large courtyard that forms a peculiar U-shaped layout, with a preserved surface area of some 500 m2. As in the previous cases, its main room is located in the centre of the building, where a large rectangular pillar was erected, respecting the alignment of the altars of the previous sanctuaries. However, on this occasion an upper floor was built, where the most outstanding objects from the sanctuary were found.

The whole of the main building is enclosed by a large, sloping limestone terrace (2.5 x 2 m) that was covered with white plaster. The main facade of the adobe was covered with slate on the underside and still retains traces of red plaster; the interior walls, on the other hand, were made of white kaolin. A corridor, or section of consecrated land, separates the main building from a series of compartmentalised spaces in the form of chapels that are arranged around the perimeter on all four sides. Finally, the whole enclave is surrounded by a deep moat that is intersected on the eastern side by a stone terrace, in whose centre is the entrance to the sanctuary, flanked by two towers. An external well and another in the centre of the patio give us some idea of the important role that water must have had in the life of the sanctuary.

A wide variety of materials was used in its construction, and these were all re-used inside other buildings before its destruction. Particularly important elements include gold jewellery and other rich personal adornments, decorated ivory and bone items, bronzes, iron instruments and the enormous quantity of pottery that has been recovered, both locally made and imported, including a large number of Greek goblets.

For reasons that are still unknown, the sanctuary was burnt, demolished and sealed with a layer of clay before being definitively abandoned. In this process of destruction, a complex ritual has been documented that took place outside the enclave, consisting of the sacrifice and ingestion of a considerable number of animals whose remains were thrown into the pit and then covered by a layer of clay.

Although there are imported materials dating from around the 6th century that may have come from the oldest sanctuaries, the final moment of Cancho Roano has been precisely dated to the final years of the 5th century BC. 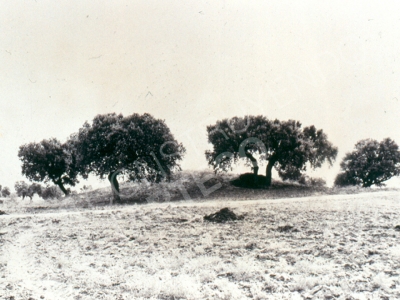 Tumulus of Cancho Roano prior to its excavation 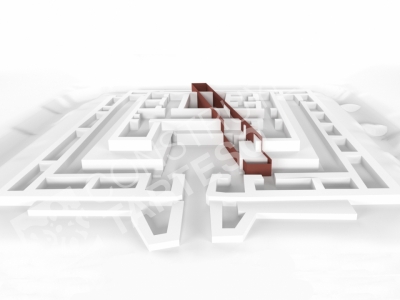 Model. The first archaeological intervention on the site is marked in red. 1978 campaign. 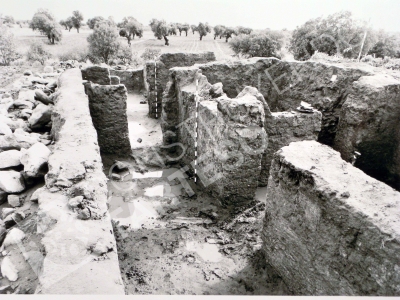 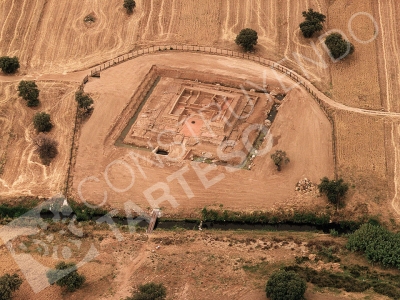 Aerial photograph of the site 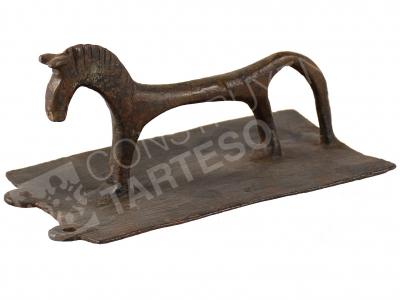 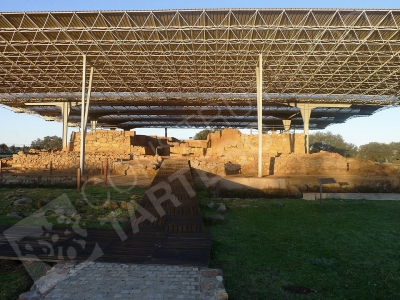 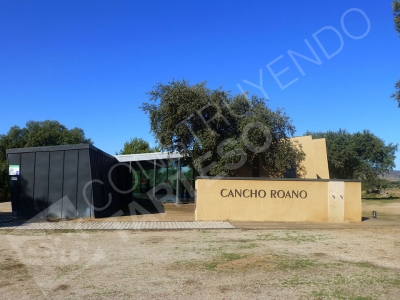 Visitor’s centre for the site